Jennifer initially went to India in 2008 to deepen her understanding of yoga and meditation. After more than a dozen trips, she began to see the practice of yoga, the country of India, and our place in the world through an entirely different lens. She was introduced to a variety of interpretations of what it means to practice, spent time with the first female sadhus at the ancient gathering of 100 million people called the Kumbh Mela, fled a devastating monsoon that took the lives of 12,000 people, spent time with people whose bodies were ravaged by polio, and sought to understand the sufferings and joys of those she met along the way.

River of Offerings is a hard cover photography and story book covering twelve stories from a variety of locations along the Ganga, India’s sacred river, from Gangotri in northern India to the delta where it opens into the Bay of Bengal. River of Offerings is distributed by Mandala Publishing.

Excerpt from the book

“In the morning, we’re standing on what’s left of the road, brushing our teeth, looking at what the divine goddess has taken away. A tiny roadside restaurant’s sign reads Love All Serve All and I take the sign as a sign. Everyone I meet seems to as well, because we’re sharing in one of those “survival ordeals” where a window inside all of us opens for a short time, revealing what we know and apparently just as soon forget during normal waking hours: we are all from the same family. The storm has washed away everything unessential, including culture and caste, and left people who are happy to be together. We look up at a sliver of blue in the sky. The morning’s small talk among car passengers is a collective prayer in a variety of languages that the rain has come to an end. Our new friends push the car to get it started and we begin another day’s travel.” 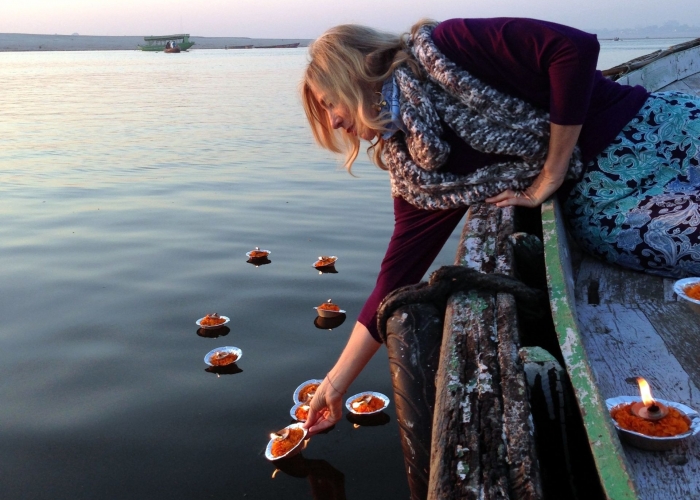 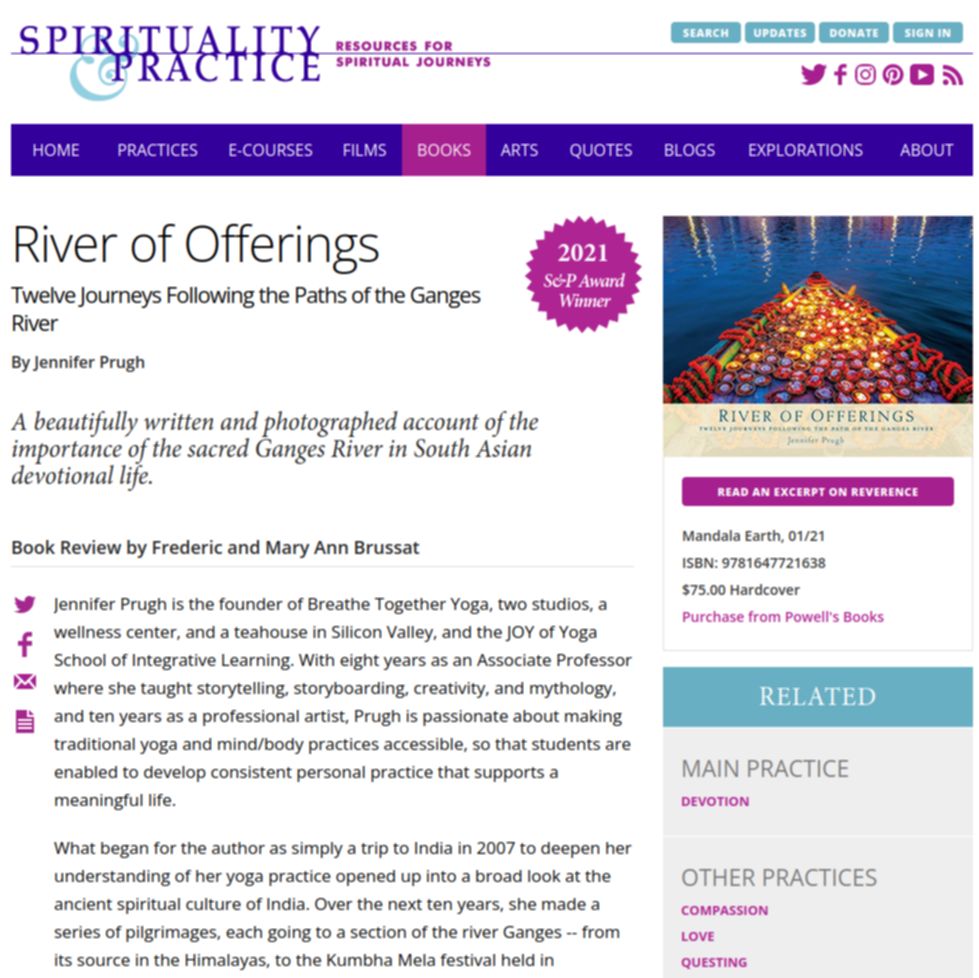 “A beautifully written and photographed account of the importance of the sacred Ganges River in South Asian devotional life.”

“What began for the author as simply a trip to India in 2007 to deepen her understanding of her yoga practice opened up into a broad look at the ancient spiritual culture of India. Over the next ten years, she made a series of pilgrimages, each going to a section of the river Ganges — from its source in the Himalayas, to the Kumbha Mela festival held in Allahabad, to the cremation ghats in Varanasi. “ 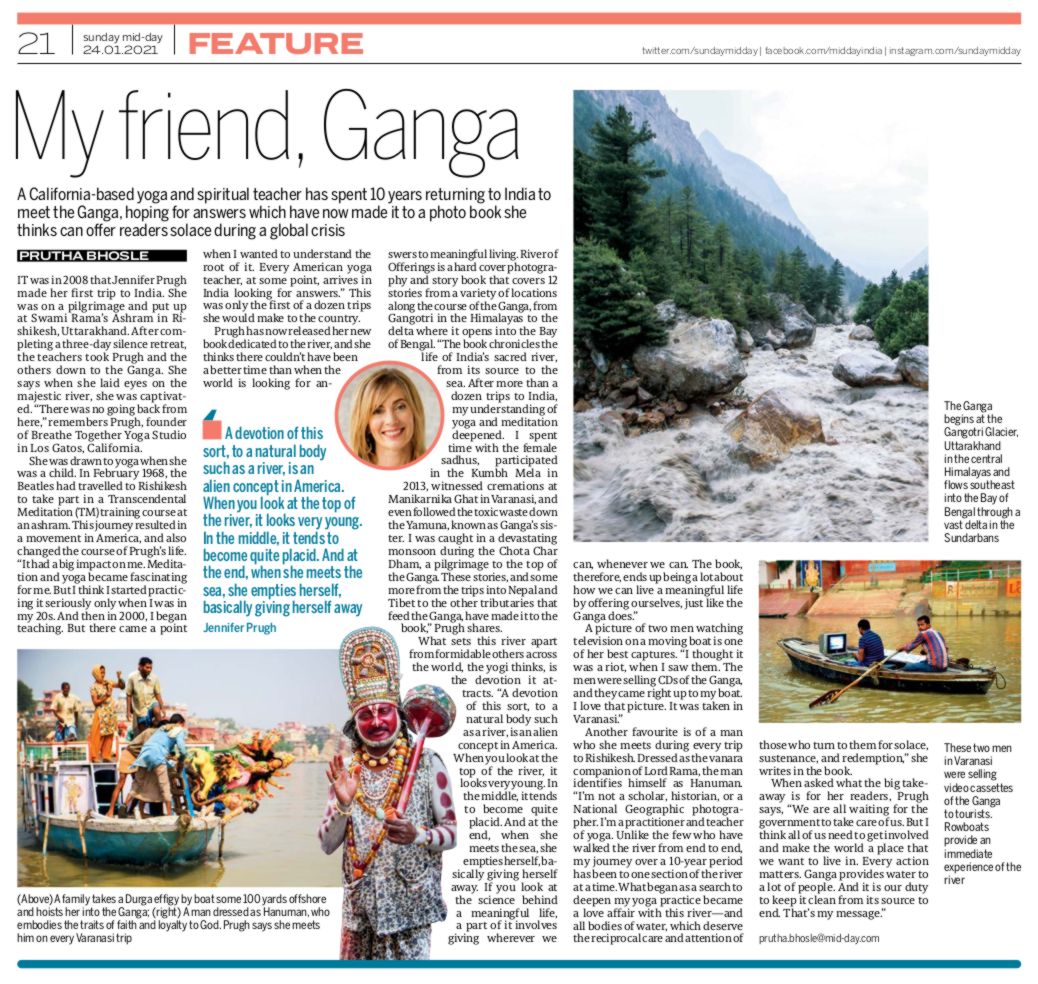 “A California-based yoga and spiritual teacher has spent 10 years returning to India to meet the Ganga, hoping for answers which have now made it to a photo book she thinks can offer readers solace during a global crisis.

It was in 2008 that Jennifer Prugh made her first trip to India. She was on a pilgrimage and put up at Swami Rama’s Ashram in Rishikesh, Uttarakhand. After completing a three-day silence retreat, the teachers took Prugh and the others down to the Ganga. She says when she laid eyes on the majestic river, she was captivated. “There was no going back from here,” remembers Prugh, founder of Breathe Together Yoga Studio in Los Gatos, California.” 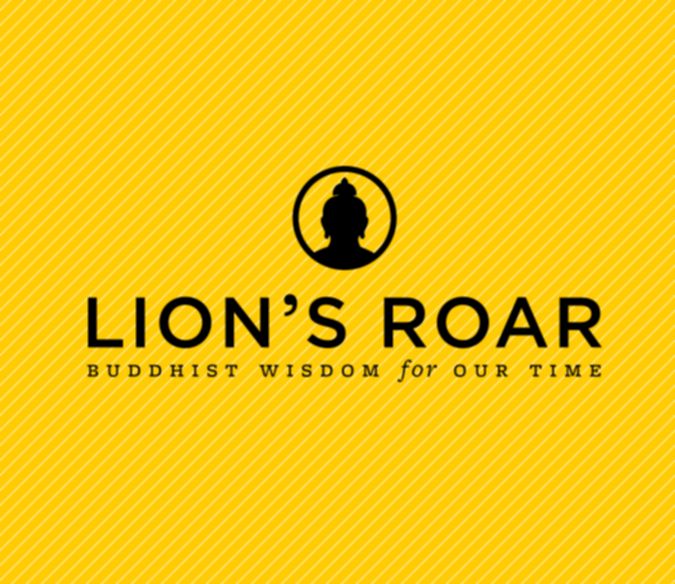 “In this striking collection of images and stories, Prugh details her many pilgrimages to India, and her experiences as she encounters the sacred Ganges River. With her, we bear witness to the raw truth of life and death, to profound beauty and unspeakable destruction. Prugh writes, “Through sustained attention and intention, we give ourselves to the moment or to each other fully, and then we let go, as with any offering when it meets a stream, or any river when it meets the great flow of the sea.'” 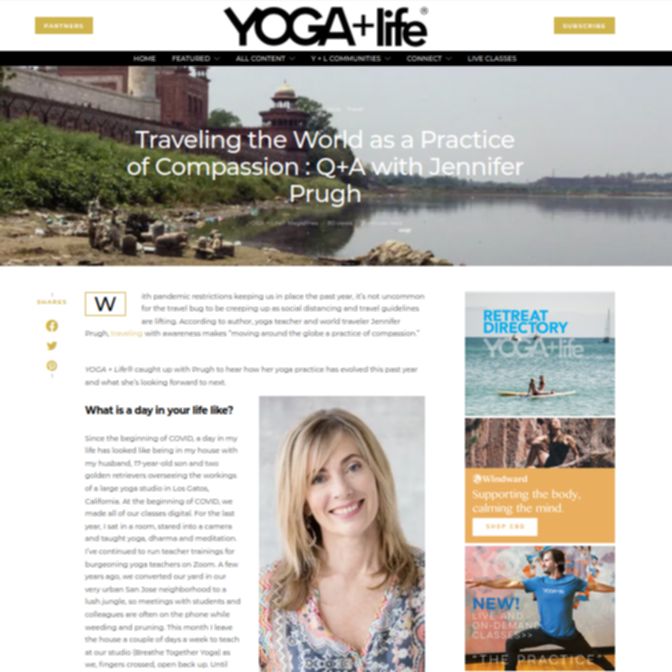 Traveling the World as a Practice of Compassion

With pandemic restrictions keeping us in place the past year, it’s not uncommon for the travel bug to be creeping up as social distancing and travel guidelines are lifting. According to author, yoga teacher and world traveler Jennifer Prugh, traveling with awareness makes “moving around the globe a practice of compassion.”

YOGA + Life® caught up with Prugh to hear how her yoga practice has evolved this past year and what she’s looking forward to next.

Deep thanks to the co-funders of this book through my Kickstarter campaign. I am grateful for your faith in this project and in me.

THROUGH BREATHE TOGETHER YOGA’S NEWSLETTER

Writings from Breathe Together Online

A Guide to Being at Home With Ourselves 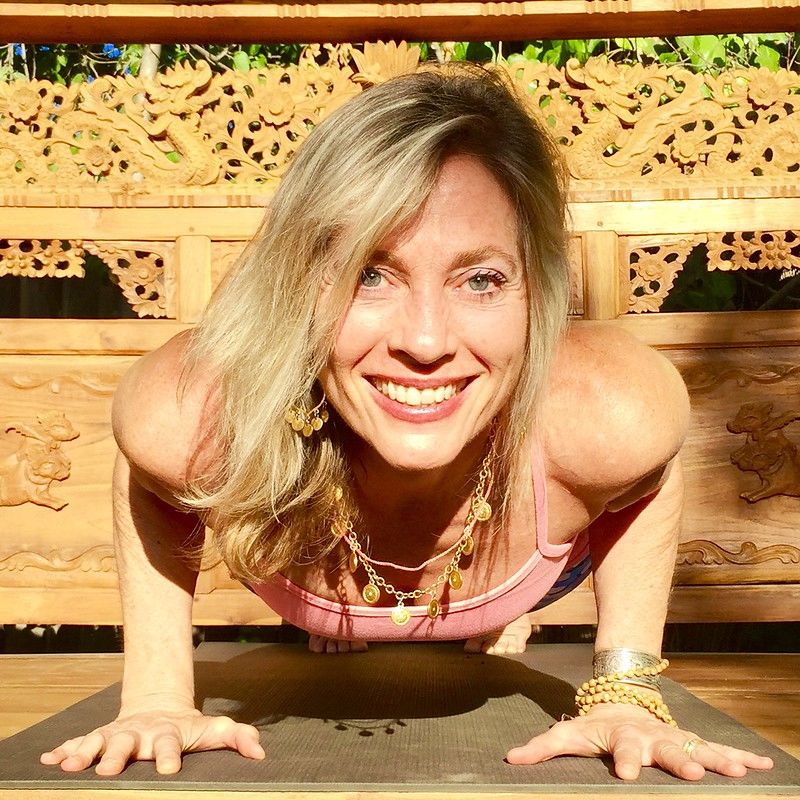 Ask Me Anything: Cultivating a Home Practice 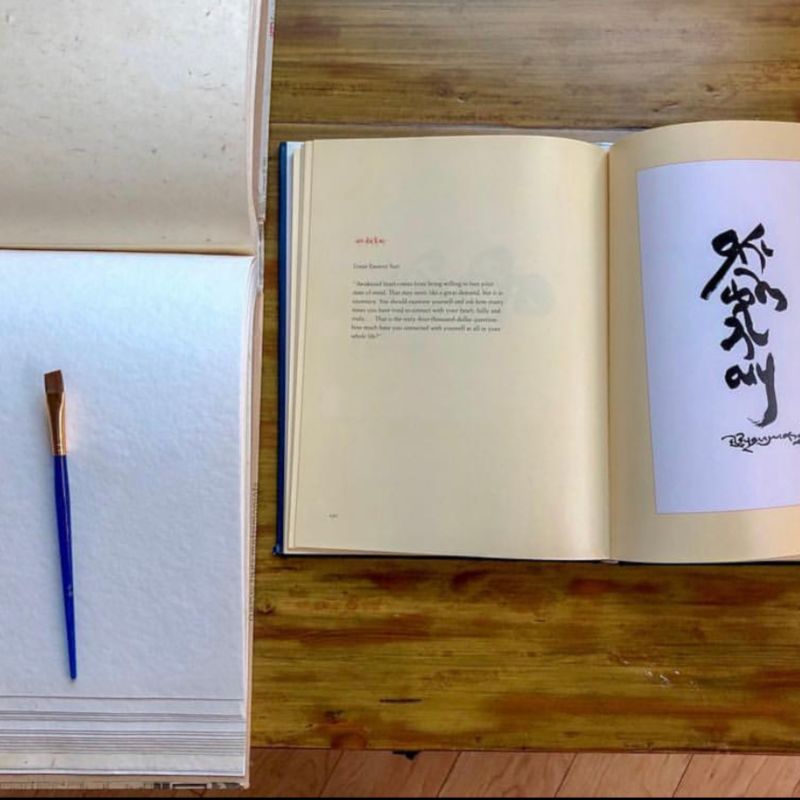 Ask Me Anything: Journaling for New Yoga Teachers 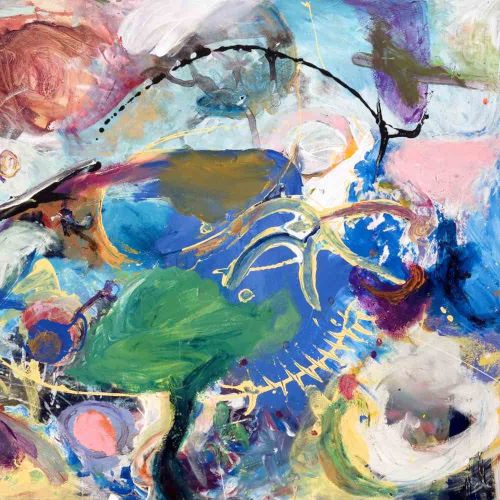 10 Ways to Act on Your Potential 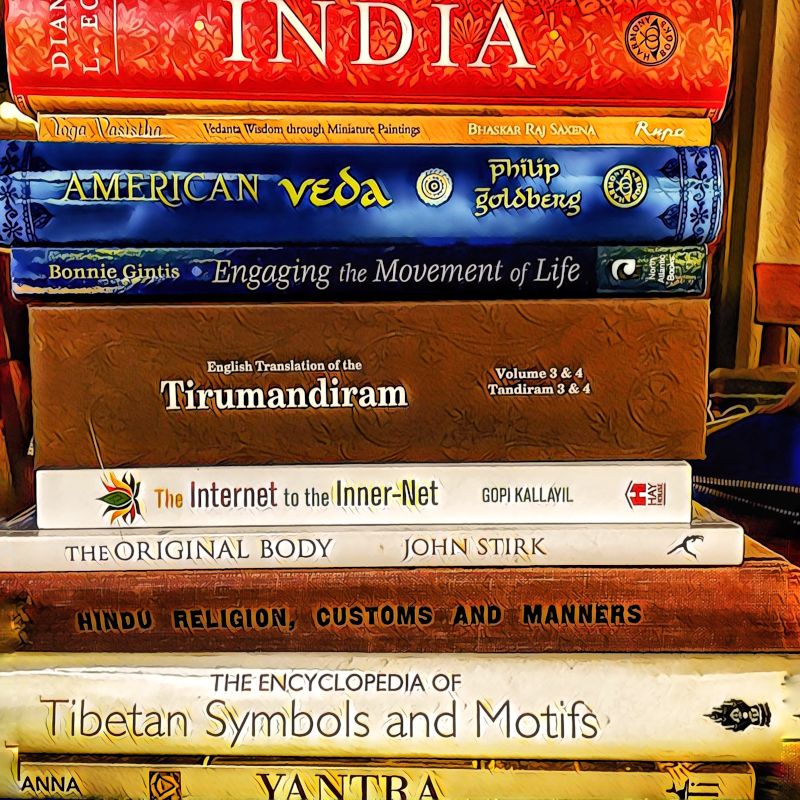 Ask Me Anything: Most-Loved Books

Where is steadiness on a windy day? Tomorrow (Tu

“Learn character from trees, values from roots a

“The true meaning of life is to plant trees, und

Two very best friends, to each other and to me.