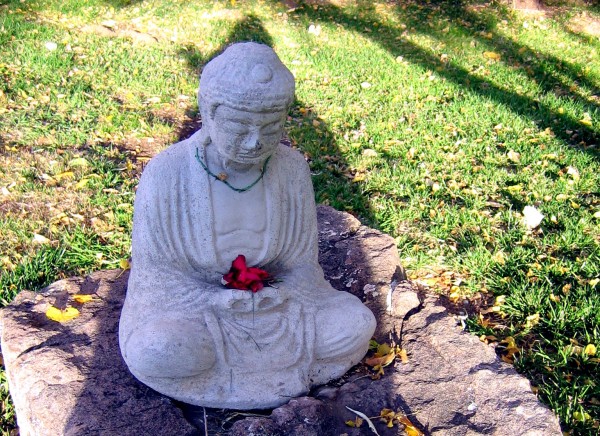 Plato likened the human mind to a ship on which the sailors had mutinied and locked the Captain and the Navigator below in the cabin. The sailors believe themselves to be perfectly free and steer the ship as they feel like at each moment. First one sailor steers for a while, then another, and the ship travels in erratic and random directions since the sailors can neither agree on a goal nor navigate the ship toward it if they could agree. The task of a human being, wrote Plato, is to quell the mutiny, to release the Captain and the Navigator so that there can be the freedom to choose a goal and to steer (work) consistently and coherently toward its attainment. Only in this situation when one is free of the tyranny of the whim of the moment can there be real freedom.

Patanjali’s (credited as the man who created yoga) likened the mind to a lake. Like a body of water it is potentially calm and crystal clear, but the thoughts, stir it into activity and obscure its true nature. These thoughts or modifications are called ‘vrittis’ and are compared to waves appearing in the body of the lake. They may arise from the lakebed (memories), or from the effects of the outside world (sense perceptions). When the waves are quieted, the water is clear, and one can see through it to its innermost levels. If this process of claming and quieting is achieved, the water becomes transparent and the inner(hu)man, comes into evidence.

Traditions known for this style: Jnana Yoga, Habad Hasidism in the Hebrew tradition, Zen
For many Westerners particularly perhaps for intellectuals this may be the path of choice. Structured meditations create the condition for the mind to do what is impossible in our usual ways of perceiving and thinking.

Begin with something from the external world, an object, word or image and simply look at it, exploring it actively with our eyes and feeling it with our hands. We try to learn to do this as nonverbally as possible, not talking in our heads about it. People have reported a sense of confidence that has developed from consistent practice of this way, an ability to make decisions quickly and accurately.

What is sought for is an alert mind without conscious thought. When this state is reached, events are perceived and responded to as they occur with the full focus of immediate attention and with no associations with the past or attachment to the future. In the Western Christian tradition there were the Quietists, who worked toward a blank state of alert passivity in order to receive God’s message. This method is practiced most often in Zen. This way has brought strength in one’s ability to remain calm in the face of outside events. It reduces one’s attachment to how things “should be” and therefore one’s response to what is taking place is less filled with irrelevant emotions.

The subject you choose may be a word, an image, a phrase, a concept or a problem. You keep thinking about the subject you have chosen and explore your reactions and feelings about it. It differs from “free association” (just following your inner reactions wherever they lead) in that you keep yourself to the subject itself and how you think and feel about it. The meditation follows your own stream of thought. People who practice this style report an increased acceptance and awareness of one’s emotional life and an increased ability to express one’s self. Examples of questions that can be used are ‘how do I love?’ Or ‘if all the potentials in me were fulfilled, how would I be, relate, create, act feel?’ An example of a phrase that can be meditated is “The eye by means of which God sees me is the same eye by means of which I see God.”

Count on the exhalation up until ten. When you arrive at ten, begin at one again. All of your attention and thought is devoted to the act of counting. When you find yourself wandering in thought, begin again at one.

Carefully applying and cultivating particular thoughts that enhance positive states of mind and diminish and ultimately eliminate negative ones. When we notice a negative thought, we identify the type and apply the opposite quality.

A renowned Tibetan hermit limited his practice to watching his mind. He drew a black mark on the wall of his room whenever he had an unvirtuous thought. Initially his walls were all black; however as he became more mindful, his thoughts became more virtuous and white marks began to replace the black ones. We must apply similar mindfulness in our daily lives. -Dalai Lama

Traditions known for this style: Christian Mysticism, Bhakti Yoga, Sufiism
Meditations that expand the ability to relate to others, to care and to love. Learning to love the self, learning to love others, or learning to love God are the focus of these meditations which are less structured than other paths and devotional in nature.

The Mantra is one of the most widely used forms of meditation. It exists in every major school of meditation with the exception of Hasidism. It consists of a word, phrase or sentence chanted repeatedly. The basic goal is to be doing one thing at time. Phrases such as “Hare Krishna,” or “Aum,” or the Christian “Deus in adjutorium meum intentde: (“Oh God, come to my aid”), the Sufi “Allah hu” or any other sound, the goal remains the same. It is often believed that a phrase that is uplifting is also beneficial because of the content. It is also believed that the vibration in the sound of mantras has beneficial effects on the nervous system. Mantra can also be classified as an Intellectual path if the mantra that is used is a neutral word or phrase, devoid of emotion.

Traditions known for practicing this style: Tai Chi, Yoga, and Whirling Dervishes in Sufi mysticism
Dancing, moving meditations, walking meditations. One learns to be aware of one’s body and bodily movements and to heighten this awareness through practice, until this awareness completely fills consciousness to the exclusion of anything else. In the breathing meditations listed below, we practice utilizing our capacity to feel the sensations of the experience rather generate thoughts about the experience.

Simply observe the inhalation and exhalation of the breath. Bring all of your attention and awareness to this simple act. When you find yourself thinking, bring yourself back to the breath.

Entry of the Breath – Theraveda Buddhism

Bring your awareness to what is occurring at the entrance to the nose where the air enters and leaves the body. One simply contemplates the sensation of the breath entering and exiting the nostrils.

Make your body comfortable. Lie down on the floor on a mat or rug. Allow your legs to fully extend. If there is discomfort in the lower back, bend the knees or place a pillow beneath the knees. Close your eyes. Allow the bones in your body to get heavy and settle into the floor. Draw your attention to your feet and relax as you slowly work your way up your body, relaxing calves, knees, thighs, pelvis, abdomen, rib cage, chest, hands, lower arms, elbows, upper arms, neck, and head. Feel the whole space within the body part. Feel the entire outer surface of the body part. Once you have scanned your entire body, relaxing as you go, draw your attention to your breath and observe inhaling and exhaling. Feel your entire body sinking more deeply into the floor.

Traditions known for practice of this style: Archery, flower arrangements, aikido and karate in the Zen tradition, rug weaving in the Sufi tradition, Singing and Prayer in the Christian tradition.
Small tasks done in total concentration with the attitude that the task at hand is the most important thing to be doing in the moment. Using creative media as a method of becoming so absorbed in what you are doing in order to have the experience of focusing and stilling the mind. You can do this practice with any activity, practicing being present while doing the dishes, taking out the garbage, or driving the same road to work everyday, allowing ourselves to experience fully whatever we are doing.