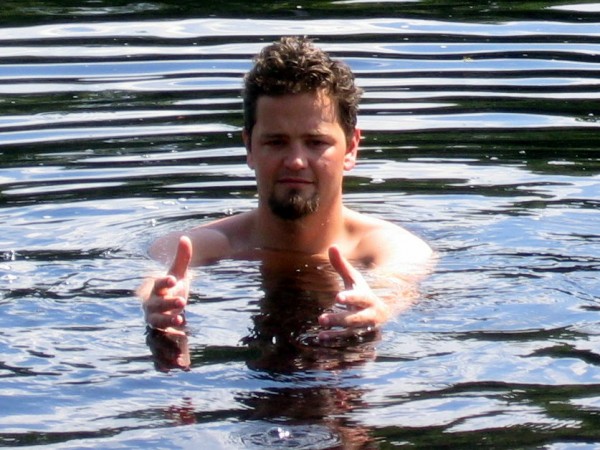 Over the weekend my husband Will and I celebrated our wedding anniversary by driving south on highway one and having lunch on the edge of the Big Sur coast overlooking the ocean. I’m telling him about a review I read of a book by anthropologist, Helen Fisher on the origin of romantic love. She states that falling in love comes down to three chemicals that produce the feeling of euphoria that lasts on average between twelve and eighteen months. But according to the reviews, this book does little to describe how one person might spark this reaction in another. We discuss why it is that some people become so captivating, while others create no response at all. Will begins talking about the neural pathways of the brain. As a baby all of our pathways were wide open. In other words, anything is possible at the beginning of our lives. As we are introduced to a variety of stimulus, we form habits in our way of thinking and behavior. And of course, as all pathways in my brain lead back to yoga, I relate what he is saying to Sankya yoga philosophy which states that the body and mind are a series of habits. Some are useful, some not. We replace habits that are more appropriate to the moment for those that no longer serve us. When we are little, everything that happens significantly affects the size of those neural pathways. As we get older, the pathways are less affected. This is why repetition becomes so important when we are creating a new habit, because it takes longer for a neural pathway to change its strength than it once did. In yoga we call it ‘practice.’

Will works from our basement as a creative director of a video game company. He is brilliant, strong and humble. He knows who he is and knows who and what he loves. He is at the bottom of Generation X, but he would say that he is aging rapidly being with me. Yoga doesn’t have much of an appeal because if he was to calm down any more he would be in a coma. He will however, listen to me talk about ‘yoga this and yoga that’ for long stretches of time. We are on the surface an unlikely pairing, but while the paths we travel are quite clearly our own, ultimately we come from the same place.

Will begins to talk about artificial intelligence. When those two words have been strung together in the same phrase I have either wanted to fall asleep, think about virtually anything else or scream. I know he is talking but I’m retreating into the thoughts in my own head away from what I have determined over time as being his overly cognitive universe and hear myself asking myself, ‘How did I ever end up with this guy?’ The song by the Talking Heads comes into my mind: What is that beautiful house? And you may ask yourself, where does that highway go? And you may ask yourself, am I right? …am I wrong? And you may tell yourself, my god! What have I done? Same as it ever was…same as it ever was…same as it ever was…

It’s not that I don’t care about what he is saying. But I really have to listen, and it’s the kind of hard work that makes feel like I’m mentally trudging through snow.

Our yoga practice is an intimate relationship with ourselves. There is the romantic period. Usually there is significant physical improvement during this phase or a teacher who rocks our world. We find ourselves repeating the practice over and over and over again and begin to get bored, or we realize the teacher has human frailties which are always so disappointing. There we are, taking triangle pose for granted while hearing David Byrne in our head. Eventually there becomes a need for practicing the zen term, ‘beginner’s mind.’ Beginner’s mind requires being willing to be a beginner, to show up as if it was the first time with no judgment, completely open to the moment. Same as it ever was…

I have a responsibility to pull myself back to the present when I’m being less than present, because it is after all my anniversary. And while I didn’t promise to listen to him until death do us part, I did promise to be with him. And being with him means being willing to enter into his world and experience what it’s like, to the best of my ability, to be him. I redirect my attention back to our conversation. As if grace descends upon me as a reward for trying, I feel as though I’m hearing him for the first time. What he is saying is totally interesting. I ask him how he knows so much about artificial intelligence. He reminds me that the reason he understands the way the brain works is because this is what he does for a living, he designs artificial intelligence. And I feel really stupid, because I really do know this. But I understand his work in a whole new way. I get a little taste of what it’s like to be him â again — because I’m willing to trudge through snow to meet him where he is. And there is that rush, the kind you feel when you are first getting to know someone and loving everything about them.

Samadhi, the final branch on the tree of yoga is bliss, supreme joy. Isn’t it great we are alive? Isn’t this moment amazing? Here we are again on our mat – again. Fantastic! Here are the people who we are sharing our lives with. When we commit to showing up, there are always discoveries. When there aren’t, we have to look inside and ask ourselves what of ourselves can we bring forward that we haven’t? No discrimination over which moment deserves our full attention.